SPEAKERS A LOOK BACK

A look back at the EBCA Convention 2010

From Nov 12. until Nov 14. the European Baseball Coaches Association (EBCA) held court in Cologne Germany for its annual Coaches Convention.

Coaches from all over Europe traveled to Germany in order to be educated, inspired from by highly knowledgeable speakers from Europe and baseball's motherland, the US. Among the the coaches talking about subjects ranging from mental approach to warm-up routines were some familiar faces. Tom O'Connell and Brent Strom, Minor League Pitching Coordinator of the St. Louis Cardinals, had both been part of previous Conventions.

First time speakers included Greg Frady, Head coach of Germany's very successful Senior National Team and Mike Barnett, a renowned hitting guru, who had just recently been assigned the hitting coach for the Houston Astros major league team. With Brian Farley, Holland's new National Team Head coach was also there, talking not about baseball at its highest level but focusing rather on youth development. Tim Rodmaker - for Strength and Conditioning -Chris Teusch, M.D and physiotherapist Martin Russ (both Germany) rounded up the classy group of speakers.

All speakers posses an in-depth knowledge of the Game and have a passion for talking about it. Hence coaches and speakers were seen mingling about after sessions just talking about the concepts brought forth during the lecture.

First prize in the annual EBCA Convention raffle was sponsored by Tanked Custom, a german uniform supplier. The complete set of pants, jersey and hats went to France.

EBCA Coach of the Year Award went to Greg Frady for leading his team to a third place finish at this year's European Championships.

The EBCA Achievement Award was presented to Georg Bull, who has developed numerous prospects and National Team players while coaching in Paderborn and Mannheim.

Here are some opinions on the Clinics:

Martin Matlacki (Germany):
"The best coaching clinic I have ever been a part of, both in terms of set-up andthe quality and personality of the speakers."

Guillaume Coste (French Federation):
"Congratulations: We had a good time. The coaches that were brought in were all veryhelpful."

Philipp Wuerfel (Editor of Mister-Baseball.com):
"I think it was a great convention. The speakers were great."

Hans Weisse (Dugout.24.de)
"The Clinic was awesome, I love listening to all these very capable andexprerienced baseball men."

Tim Rodmaker (speaker - MLB)
"This was my first EBCA and I was honored to speak. It was my pleasure to meet many coaches one on one, discuss their situation, and learn about their baseball lifestyles. There are many passionate people in roles with the possibility of helping European baseball continue it's positive growth. I look forward to my next EBCA."

Benjamin Kleiner (Germany)
"The Convention was fabulous. Thanks EBCA"

Next year's EBCA Convention, its 8th edition, will be held in Prague, Czech Republic from the 11th to the 13th of November 2011. 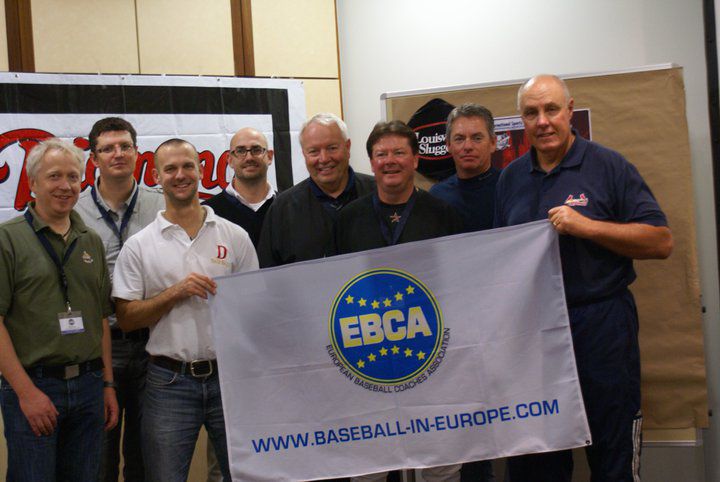